Showing posts from June, 2006
Show all 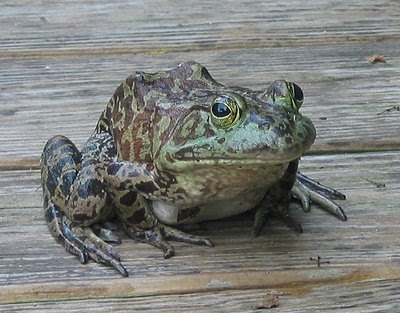 We had a staring contest in my backyard. He totally won.
Read more

- June 26, 2006
It's been about a month since this happened and I'm cool, so I'll tell you about it. During the Great AW Blackout, I was on the phone with supermod Lori (Birol) talking about life and stress and timing. I told her that it was just about time for me to take a pregnancy test, but that I didn't even know what to wish for this month because I felt like I was on the verge of a nervous breakdown and that this would be "a miscarriage waiting to happen." It was while I was still trying to get back our databases and freaking out over how I was going to pay salaries and the new server costs and all that. And then I took the test... and it was positive. But with a qualifier: I was supposed to read it within ten minutes, and instead, I was in the shower and didn't get to it quite on time. I read it at about the 15-minute mark. Anthony was there with me, and I excitedly flung it at him, saying, "Do you see the line?" It was very, very light-- but he saw i
Read more
More posts