Showing posts from May, 2010
Show all

Part 2: More about the little girl in Marshalls

After sharing the story of what happened when I witnessed child abuse in Marshalls (see my previous post), both here and on other forums, I received some good suggestions. The main suggestions were for me to call CPS and the police anyway, even though it was the following day and I had very little to go on. I decided it was worth the effort. First, I tried CPS. I told the story, but the worker informed me that they couldn't do anything without some kind of identification. I said that the store should have surveillance video, and she said, "That's the store's private property. We don't have any right to that video unless we get, like, a warrant. You'd have to go to the police. Maybe they could get it." I asked her what I could do in the future if something like this happened, and she said, "Get the license plate number." (Just like my mom said.) Next, I called the police's non-emergency number. The officer I spoke with was nice and listened
Read more

Little girl, I am sorry

When Sarina and I arrived at Marshalls department store tonight and stood on line to return something, there was a bit of a commotion going on at the front registers. A little Spanish girl, 2 1/2, maybe 3 years old, was standing among the customers on line and she was shaking a little bottle of soda. She had a big grin on her face. The cashiers were trying to get her to stop, warning her that if she opened that cap, it was going to explode everywhere. They asked her where her mommy was. I'm not sure if the girl spoke English, or if she spoke at all yet. But she didn't move, and just kept on grinning and giggling as she shook up that soda. There was some buzz-- where was this girl's mother? A worker from the layaway desk called out, "She's in the Misses department. Since she walked in, she's just let her daughter walk around the store alone." After another minute or two, one of the workers tracked down the girl's mother. "You have to watch her,&
Read more 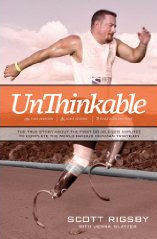 Update: Congratulations to winner Jon_Lefkove! “I want to show people that they can take the life God gave them and use it to do something extraordinary.” — Scott Rigsby 9 seconds. That’s how long it took for Scott Rigsby’s life to come crashing down around him. 16 hours, 42 minutes, 46 seconds. That’s how long it took for Scott Rigsby to make history. One day when Scott Rigsby was eighteen years old, he was riding in the back of a pickup truck that was towing a three-ton trailer. When the trailer was clipped from behind by an eighteen-wheeler, Scott was thrown over the side and dragged 324 feet before being pinned under the trailer. Later, at the hospital, his right leg was amputated—the first of twenty-six surgeries he would endure over the next ten years, including the loss of his other leg. Doctors said it would be more than a year before he could expect to walk again—let alone run. Eleven years later, Scott did the unthinkable . . . On October 13, 2007, after arduous
Read more

The rule is, if you read this, you have to tell me a random story from your life, too. Too late! You're already reading it! Those are the rules! Okay, my random story for today... On spring break from college, my roommate and I were being hit on fairly incessantly, as college ladies on spring break tend to be, and were tired of it. One man walked up to us and tried to start a conversation, and my roommate faked a peculiar accent and said, "No speak English." He asked, "What language do you speak?" "Swahili," she said. It seemed a pretty safe choice. Right until the moment when he said... "Ndio! Ninazungumza Kiswahili." The guy spoke Swahili. We stammered something stupid and left. Poor guy. But we learned out lesson... from then on, we claimed to speak only Norwegian. Your turn.
Read more
More posts