The Long Hair Activists Found Me

- August 20, 2005
Strangest thing. I wrote this little book, Hattie, Get a Haircut! , and talked about it in my recent Absolute Write Newsletter. In the book, Hattie decides that she will never, no way, not at all get a haircut. Eventually, she changes her mind and discovers she can do a good deed in the process by donating her hair to Locks of Love.

Locks of Love is never actually mentioned in the text, but there's an "Ask me about LOL" sign in one of the illustrations. My editor had suggested this angle; originally, Hattie just decided to get her hair cut, period. I liked the addition of a "good deed" because anything that encourages kids to be thoughtful is a smart idea, in my opinion.

Anyway. I got a couple of letters from people who are anti-LOL. They told me that the charity is no good, mostly because they don't use a lot of the hair for wigs for kids. They sell a lot of it. I knew that, but was okay with it because I know they have plenty of expenses-- they pay for the manufacturing of these wigs for kids, so the money has to come from somewhere. But I agreed with the letter-writers that I would contact the company for answers to some unanswered questions about their funds.

Apparently someone notified a "long hair activists" group. Did you know there was such a thing? It's almost a religion. They don't want anyone to feel pressured to cut their hair, ever, and have pulled out all the stops to attack Hattie. Wow! They've written to the publisher, the publicist, and the reviewers in protest.

My mind is boggled. I wonder if they'll try to get the book banned. Banned books sell really well...

Here's the troublemaker in question: 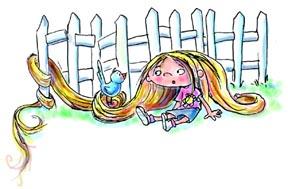