Why do I dream of the vapid?

- March 22, 2006
No, really, this is disturbing me now. Last month, I had a series of dreams involving Paris Hilton and Nicole Ritchie. I've no idea why. I think we were friends in the dreams.

Since then, whenever I do remember my dreams, chances are good that they involve a celebrity-- and not a celebrity I particularly admire, but the ones who are more known for partying, being ditzy, etc. Last night's dream involved Leonardo DiCaprio, whose house I was considering buying. He had lived there with his mother and brothers, and it was kind of a small, crappy house. When I went to look around in the backyard, I took a jacket from Leo's wardrobe to keep me warm, which I explained to him later, when he showed up in the kitchen. I was being flirty with him, then his face morphed into a horrible human being I dated in high school.

I don't ever remember having celebrity dreams before. Is there a dream interpreter in the house? 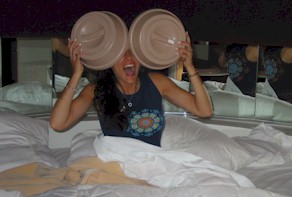