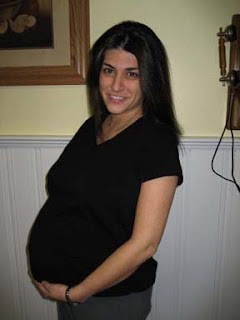 So I was back in the hospital a few days ago. This time, it was because one leg swelled up terribly and doctors thought I had a blood clot. So they injected blood thinner into my abdomen (wait, I'll repeat that-- yes, they stuck a needle into my abdomen!!) and then admitted me because they don't do sonograms at night, and needed someone to do a sonogram on my leg to check for the clot.
Well, I was on bedrest (only while I was in the hospital... phew!), so they wheeled me into a room with a woman all loaded up with tubes and IVs. Within about a minute, she told me she had just had surgery for kidney stones the night before. Within about five minutes, I knew all about her 5 days of vomiting, her current bowel movements, her phlegm, her daughter's cancer, the fact that she hates eggs, and which doctors are having affairs with their secretaries.
She pulled back the curtain between us, of course. And proceeded to talk ALL NIGHT. Literally. I didn't sleep at all... not that I could have anyway. I had a needle for an IV stuck into the crook of my arm, and it just made me so ooked out that there's no way I could have really relaxed. But still.
When they wheeled me out again for my sonogram, she noticed my bulging belly and remarked, "Wow, you're going to have a really BIG BABY!"
Gee, thanks. Yes, I know. I'm tiny and the baby is huge. My doctor already made sure I was aware of this. I'm thrilled. I'm aiming for 14 pounds so I can ensure that I'll never walk again.
When she talked on the phone with her daughter, she informed HER that I was going to have a really big baby, too. And when her husband showed up to visit, she told him, too.
My parents came over in the morning, and she chatted them up. Turns out she knows every doctor within a 50-mile radius. I don't mean that she knows their medical training; I mean she knows all about their personal lives. I have no idea how, but there are four doctors on my parents' block, and she was able to authoritatively tell them about each doctor's affairs, who had an out-of-control daughter going through a "Gothic phase," who's already been divorced and left his ex with nothing...
Then she paused to detail her latest bowel movement before continuing on with the gossip.
Before we left, she made my mom take her phone number and promise to call after my baby was born, to let her know that everything went okay. Y'know, because the baby was going to be so big and all.
When I tell people about this experience, most of them tell me, "Oh! I had a roommate just like that when I had [gall bladder surgery, a broken arm, my appendix removed, etc.]." I'm starting to think Emily just drives around the country staying in hospitals and annoying people. Perhaps she's hired by health insurance companies, so people will pretend to feel better faster so they can get out of the hospital. I know that the moment the doctor said, "Good news!" I was halfway into my pants and running down the hall with my hospital gown trailing behind me. "No clot!" she called. "Wish I could stay and chat about it," I called back from the elevator.
I'm in my 35th week now, so I've pretty much hit a safety zone... if labor starts now, the doctors won't try to stop it. Which is comforting and terrifying at the same time. I suppose it's time to pack that hospital bag...
pregnancy