- February 18, 2007
A while back, a woman on a pregnancy board told us about a pregnant acquaintance of hers who was told not to come back to a YMCA because she was wearing a two-piece bathing suit in the pool. Apparently, the swim instructor didn't approve of her "bare belly" and said it was inappropriate for children to see it.

I was shocked and told my mom about it on the phone... in a "Can you believe this?" sort of way, and Mom promptly agreed with the swim instructor. She told me she thought it was too "risque" and inappropriate for children to see a pregnant woman's belly.

For real. This caused quite an interesting conversation, wherein she claimed to see no difference between baring a belly and baring one's breasts, and that children were bound to ask questions about how babies are made if pregnant women "flaunt" their bellies. And then parents will have to explain the birds and the bees much too early, and morality will decline further, and society will fall to ruins. She's not even particularly happy about pregnant women wearing fitted tops.

I am an endless source of shame for my mom, mind you, because I'm an avid belly flaunter. Give me an excuse to flash someone my belly and I'll do it. The smallest excuse. Like, someone will ask, "How far along are you?" and I'll flash my belly and ask, "How far along do I look?" (At which point they say "11 months" before fainting dead away.) Or someone will ask, "Nice weather, isn't it?" and I'll say, "Let's ask my daughter. Helloooo in there! What do you think of the weather today?"

Mom's getting used to it, bless her. She doesn't complain much when I do it, but she does get flustered and begins babbling to whomever I've just flashed.

So, wanna see my belly? 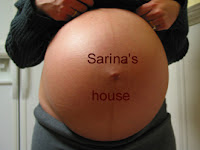 I know, it's a sight to behold. Don't tell my mom I showed you.