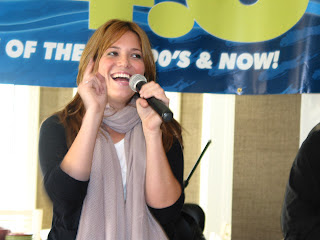 All last week, I called in to a radio station to win tickets to an event where Mandy Moore would sing a few songs, then mingle with the crowd signing autographs and answering questions. The event was called "Martinis with Mandy." I was so goofy with excitement when I won that the DJ asked me how old I was, because he was pretty sure I was a kid who could not drink martinis with Mandy.

Yeah, my voice does that. I have to consciously NOT sound like a 12-year-old, particularly when I'm excited. I don't have a high-pitched voice, but for whatever reason, it sounds young. This is one of the reasons I'm wary of doing radio interviews. But anyway.

I've admired Mandy Moore since A Walk to Remember. Didn't know her early albums, which is apparently a good thing, because she thinks they were pretty lousy. Her latest, though, Wild Hope, is a folk album. That's my stuff.

So today was the big day and I, of course, brought my brother-- best audience member in the world. Unfortunately, several things went wrong. The place was hot and there were no chairs, and we stood for two full hours waiting for the show to start. One of those hours was because the radio people told us to come early so they could check IDs and such, and the other hour was because Mandy's flight was delayed and she came straight to us from the airport. It seemed she must have had someplace else to go right afterward, too, because she was there for only half an hour and then jetted out the door. The people from the radio station said that she'd sign stuff for all of us and we could pick it up at the station next week; I guess whoever did the scheduling made it all too close for comfort.

She took a few group photos before she sang, then did four songs from the new album (I loved Gardenia). She's beautiful in person, and her voice sounded super. Wish we had gotten to speak with her, but it was still nice to see her in such an intimate setting (a small room with maybe 70 people in the audience. We were right up front).

Here's the group shot-- I trimmed it down, but there's still someone I don't know in there (hi, person! Hope you don't mind being on my blog!). The photo on top of this post is one of the few clear photos I took. Don't know why I'm doomed to take fuzzy pictures whenever it's important. 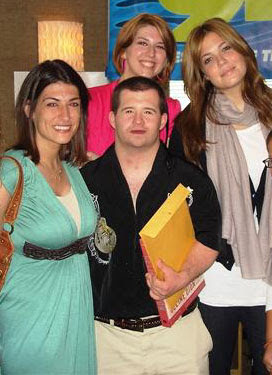