Sarina is learning things at an astonishing rate right now-- I feel like she's in the middle of another of these "milestone madness" weeks. Among other things, she is now calling the cat "ca." She doesn't yet know that I'm "mama" (she uses the word "mama" all the time, but doesn't associate it particularly with me), but she knows the cat. You know what's funny? I totally predicted that. She's so in love with my cat. I guessed a while back that her first real word would be "cat," (or "kitty," which is what I usually call her).

The beautiful thing, though, is that she's learned to share. She will feed her mommy one of her peach puffs, or share her gummed-up biscuit with me. I never would have thought that I would have accepted a half-eaten teething biscuit from another human being, but you know? When it's your baby, it's just not gross. It's beautiful. Last night, we took turns. She fed me one bite (and cracked up), then took a bite herself, and so on. It was the greatest.

And because I clearly have the greatest little person on the planet, it did not seem at all unreasonable that I managed to spend the better portion of two days searching online for just the RIGHT tutu to buy her for Christmas. I still haven't found it. I've been all over Etsy and eBay, and I'm hopeful that I might have found a woman who can custom-make one for us in just the look I like (classic light pink, nice and full, mid-length). I think it's entirely possible that I will die of cuteness overload when I see her in one. I also don't yet have a Christmas stocking for her (and I want a gorgeous personalized one), so if anyone has suggestions, please post 'em! 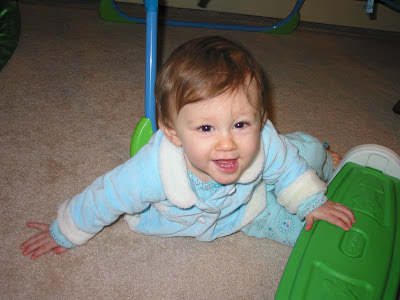 Diaper changes are getting tougher and tougher-- she will NOT lie down, and works up a pretty good fit now when she wants to-- so I've finally learned a trick. She loves her sign language DVDs, so I now move the changing pad into the living room in front of the TV and turn on the DVD when she's being really rough. It's as if I've just given her a tranquilizer. She lies there TOTALLY COMPLACENT, totally calm, for as long as that DVD is on. I could go visit with a neighbor and not even worry that she'd move from that changing pad (shush! I wouldn't!). That was my mom's idea when I called to say that the poop was just going to have to stay in Sarina's diaper forever, because I couldn't fathom a way to change her short of something involving a lot of rope and chewing gum.

This little girl has me sooo wrapped around her little finger. Even when it's covered in mashed peas.
Sarina