So, I Got This Giant Thing Out of Me. 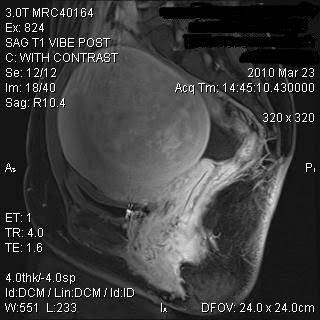 I had this ridiculously big fibroid in my uterus until last Monday. That's when talented surgeon Jeannine Villella chopped it out of me. For those unfamiliar with these beasts, fibroids are (almost always) benign tumors that may be inside the uterus, attached to the uterine wall, or on a stalk outside the uterus. Mine was attached to the wall, and made my uterus the size of a 4 or 5-month pregnancy. It amazes me that the human body can work with a crazy invader like that taking up so much room.

I was surprisingly calm, considering this was my first major surgery. The fibroid was squashing my other organs-- organs I like-- so I knew it had to come out. I had an operation called an abdominal myomectomy, and was warned that there could be horrific pain afterwards... but there wasn't. There's been a lot of discomfort, swelling, bloating, and pathetic-looking walking, but it was not the agony I had heard it could be. Huzzah!

Now I'm under orders to take it very easy for the next 5 weeks-- no bending, lifting, cartwheeling, jumping on trampolines, scaling large walls, bungee jumping, skydiving, or riding llamas. The hardest part is definitely that I can't play with Sarina the way we normally do. She wants to tackle-hug me and have me chase her around the room, and my speed is more like that of a 90-year-old with a broken hip. But I'm getting there.

By the way, a true public service announcement for the ladies-- if you have a protruding belly that's not usually there, bladder "issues," very heavy periods, bleeding in between periods, digestive problems, fertility problems, miscarriages... get checked for fibroids. (I didn't have all of those symptoms, but I had most of them. I'll let you guess which ones, so I can retain my *cough* dignity.) Fibroids are very common and generally cause no symptoms (so they don't need to be removed), but some of us extra-special people get troublesome ones that grow really large or multiply like Gremlins, and those need to be evicted. There are several types of surgeries and procedures to remove them, depending on factors like the size and type and whether or not you care about your fertility.

I was mighty happy to wake up with a uterus, considering I was on the maternity ward! How awful would that have been if they had converted to a hysterectomy and I was surrounded by new moms?

A doctor had originally told me my fibroid was the size of a "baby's head" (why not just a nice grapefruit or something?), so my parents thought it was funny to get me a "Congratulations on the birth of your alien baby head" card instead of a get well card afterwards. I meant to ask my surgeon to take a photo of it for me, but I forgot. Afterwards, I asked her, "You didn't happen to take a picture of it, did you?"

And of course, because I'm a writer and I can't seem to ever turn that switch off, I'm thinking about whether or not to write a book about fibroids now.