- April 01, 2007
This is a post about breastfeeding, so if that sort of thing ooks you out, this is fair warning that it's best to skip it. 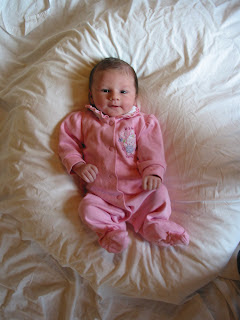 I was lucky enough to have read a lot about breastfeeding troubles toward the end of my pregnancy, so I was mentally prepared for it to be more difficult than one might expect. I mean, I have breasts, the baby has a mouth... what's so hard? But I had read so many stories from mothers who felt terrible anguish when things didn't go well, and I promised myself I wouldn't do that. I thought, "I'm going to try my best, and if it doesn't work out, it's okay to use formula."

I found it funny that there were whole societies dedicated to breastfeeding. I found out that two old friends of mine were very active in La Leche League, and I wondered, "What in the world is there to talk about that these women would actually go to meetings-- regularly-- to bond with other breastfeeding women?" A couple of lessons, okay, but an actual club with leaders and advocacy and peer support systems and all that stuff? It confused me that this could be such a big thing.

Well, our breastfeeding attempts didn't go so well. For our days in the hospital, I was very worried that I was going to have a "colicky baby" because she spent hours crying each morning, freaking out with frustration because she couldn't get a good latch-- or, once she was latched, apparently couldn't get enough to drink. It was harrowing to listen to her cry and watch her face get red with frustration and be able to do little more than say, "It's okay... you're right there... hang in there, kiddo." The nurses gave me breast shields to wear, and when colostrum filled the shield, I fed it to her with my finger. But I didn't beat myself up over it. I figured once my milk really came in, we'd be fine.

But we weren't. Every feeding was a crying session, heartbreaking to witness. She looked so desperate. So I started using a breast pump and feeding her my milk from a bottle, and that worked beautifully. Suddenly, my child was a total angel who rarely cried, and pumping hurt less than nursing, so all it really meant for me was a little extra time and more stuff to wash every few hours. Very worth it to see her relaxed and happy.

And I was happy to see my milk was in such abundant supply. My mom told me that some people become breastmilk donors for babies who are allergic to formula and whose own mothers can't breastfeed. I thought I might do that. Bottles filled the fridge and life was good. I slowed down the pumping because I had so much milk stored up that it seemed silly.

Two weeks later, the well ran dry. All of a sudden, overnight, I went from being able to pump 8 ounces of milk in a 7-minute pumping session to not being able to pump even 3 ounces in a 20-minute session. I thought it might have been a fluke, but it didn't improve the next day, so I looked up "increasing milk supply" or something like that on Google, and found out that I had royally messed up.

Turns out that in the first two weeks after your milk comes in, your body overproduces because it has no idea yet how much your baby needs. Around the third week, it produces what it now thinks you're actually using. Based on the fact that I had only needed to pump a couple of times a day in those last few days, my body thought my baby was anorexic, apparently.

So I had to build back the supply by showing a greater demand, which meant pumping every 2 hours for 20 minutes at a time, even through the night. I have managed to increase the supply somewhat, but it's nowhere near back to where it was those first two weeks.

Every day this week has been a race for me; when will I need to supplement? I'm always just one bottle ahead of her. I pump and pray there will be enough for her next feeding, and that she won't wake up and suddenly want to eat early, or I won't be able to pump enough in time for her next feeding. Every night I've gone to bed thinking, "If she wants three bottles instead of two by morning, that's it. I'll have to give her formula."

And I know formula isn't poison. Honestly, I know it's not a big deal to have to supplement every now and then, but I feel like that's the beginning of the end for me. Right now, I'm still winning-- barely. I feel like James Bond narrowly escaping the ticking bomb every few hours. Every time I fill a 4-ounce bottle, I think, "Ha HAA! I WIN!" Then I laugh maniacally. (Quietly, if she's sleeping.)

Even though I had prepared for breastfeeding to be tough, it was hard to prepare for the pride I'd feel in being able to provide for my baby, and how it would hurt to have that taken away. It feels good to know I'm doing my best for her, even if it means getting up to do uncomfortable things and washing pump supplies and bottles so many times a day that the skin on my hands dries out and cracks. I look into her eyes and watch her drink her bottle and think, "That came from me. I made that special for you."

I get it now, why all those women would join La Leche League, why breastfeeding is such a big deal, why there's so much riding on it mentally for some mothers (rightly or wrongly).

So last night, I was about to go to bed, and I had two bottles left. One was full, the other was about 3/4ths. Sarina was crying, so I warmed the full one and brought it to her. Then I squeezed the liner to get the excess air out, and...

I mean, exploded. All over her, all over me, all over the floor. I desperately tried to feed her the few drops left in the nipple, as if that was going to help. Now she was soaking wet and crying, and I had to use the last bottle left, which wasn't even full. In the ensuing chaos, I managed to put on a new pair of pajama bottoms inside out, and give her a "bath" by wiping her down head to toe with baby wipes.

"This is how it ends," I thought. "We were so close! One lousy spilled bottle." I felt so defeated.

But then... she got up only once in the middle of the night, instead of twice, because she's a very polite child.

I got up to pump, and got one bottle ahead of her again. So here I am with one bottle left in the fridge, feeling almost comically like I'm living on the edge (of what?), in this mad contest with myself to make more milk so I can keep my baby happy and put off the formula for one more day. I'm pretty sure we'll make it to at least midnight tonight, so that means we've made it to her one-month birthday. It feels like a milestone.

I am Lacto-Woman. Hear me pump.
breastfeeding pregnancy Sarina