Stalled on the milestones

- August 25, 2007
Sarina was so ahead of schedule for her first three months-- she was holding in her own pacifier on day three, reliably flipping over from back to front and holding up her head by month three, vocalizing, holding on to toys, and so on-- that nothing could have surprised me. Walking and speaking in full sentences by six months? Sure.

By month four, when she was rocking back and forth and hurling herself around the room by dragging her head while she quasi-crawled, we all took bets on how much longer it would be until she really crawled. My bet was three more days; no one bet longer than two weeks. But here we are, closing in on six months, and she's actually made no progress since then.

She also makes exactly the same vocalizations as she did at three months. No consonants. Just a steady stream of "ahhhh"s and "eh"s and the occasional "ooh." She doesn't sit up well, even with pillows. She doesn't "razz" or mimic my faces. (On the other hand, she does go after her toys, laughs at all sorts of things, and other good stuff.)

None of this concerned me until I began reading about developmental milestones again and realized that she's no longer ahead of the game, but maybe even a little behind in some areas. Now, before anyone reassures me, I know full well that there's nothing to fear if a baby doesn't hit all the milestones at the "prescribed" times and that there's a wide range of normal. I'm sure she's fine. It just strikes me as a little odd to realize that she hasn't made much progress in two months. I would have assumed that an early developer would remain an early developer, a late developer would remain a late developer, and so on.

One of my new favorite pics: 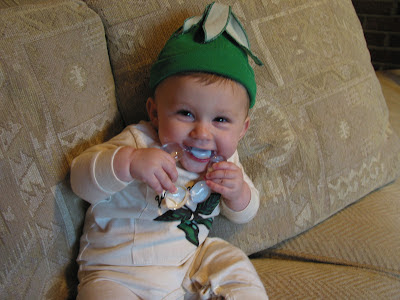