- September 04, 2007
Clearly, the child is going to be the sort who needs the gauntlet to be thrown down before she acts.

As if to mock my second to last post, she has decided to hit all her milestones at once (like astonwest's niece).

Three days before her 6-month birthday, she sat up by herself. No real warning. I didn't think she was ready to do it. But she did it-- and then stuck her arms in the air and bellowed "Aaahhhhhh!" in a victory cry.

The next day, she stood up in her crib (and gave Mom a case of the vapors. Mom was about to get in the shower, saw vertical legs in the video monitor, and ran in to see what was going on-- promptly scaring the heck out of the poor baby, who bit down hard on the crib rail that she was gumming).

She crawled! At Aunt Michelle and future Uncle Jimmy's house. She had been in a crabby mood most of the day, but made up for it about an hour before we went home, when she began crawling to reach her beloved blue cow.

So, life is pretty exciting around here right now. I tried to post a laughing video in that last post, but it uploaded all night and never went through. I'll work on that for next time. Meanwhile, have another cutie pic: 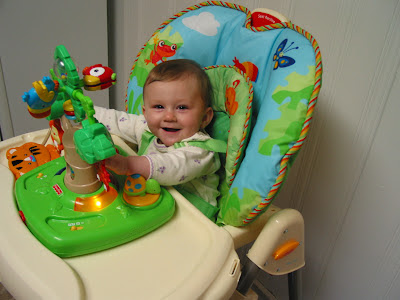