They bought me an iPod.

You ever have someone you want to thank at work or school or something, so you get a bunch of people to pitch in and buy the person some flowers or a t-shirt or a restaurant gift certificate or something? Right, me too. But when that "bunch of people" are Absolute Writers, apparently they think bigger.

They bought me an iPod. And not just any iPod, but the world's greatest iPod. With the extended warranty. And a big gift certificate to iTunes.

I got the e-card today, which says: "Your friends and fans at the Absolute Write Water Cooler want to thank you for all your efforts on the behalf of other writers everywhere. With love and appreciation from..." and a list of 52 writers who are part of the forum, plus a few "anonymous"es. I've been staring at that list all day, trying to figure out how to say "thank you." I mean... they bought me an iPod! I've never even seen an iPod in person before. It took me until two years ago to get call waiting, for crying out loud.

I feel so spoiled and so touched and so excited! This is me, "practicing" using my iPod before it was charged. ;) 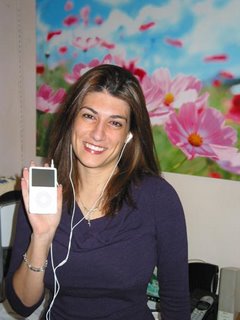 I've loaded The Police's Every Breath You Take: Singles onto it, and an Amazon podcast. Granted, the album is from the early 80s, but still-- I feel so with it!

If you're reading this and you were part of this ridiculously cool effort to spoil the heck out of me, thank you so much. I'm going to be floating on air for a long time.

Oh, and PS! The mammogram? It was disappointingly mundane. I was expecting to come out of there with some kind of comic fodder, at the very least. But truth is that it took about 5 minutes, didn't really hurt, and my squished boobs didn't look all that strange. They took four X-ray pictures and told me I was fine. (Then there was a brief period where they told my doctor they changed their minds, but they changed them back. Or something. Doctors are weird. I'm fine.) Thanks for all the we-know-you're-really-going-to-be-fine, but-best-wishes-anyway-just-in-case type of notes. Sorry no machines went on fire. Maybe next time.