Our Trip to Sesame Place

- September 13, 2010
I've never been to Sesame Place before, and now that Sarina is 3, I had been hoping to take her there... luckily, I won four passes from MyWorkButterfly and one from Sesame Place's Twitter account, so I got to bring the whole family!

We arrived the day before our "big day" and stayed at the Radisson Hotel Philadelphia Northeast. There are a couple of hotels right in Langhorne where Sesame Place is, but they're pricier. From the reviews, it seemed like this Radisson would be a good pick-- a very reasonable price and an easy commute.

The reviews were right: the drive was nothing, and the hotel was terrific. We stayed in a 2-room suite that was spectacular. One of the rooms was your basic size hotel room with two double beds, though a step up in terms of decor, cleanliness, and comfort (we got to try Sleep Number beds for the first time... they were interesting, though not as amazing as I'd hoped), but the other room made us feel like we were VIPs. It was huge, with a lovely living room area, in addition to a separate kitchen area and entrance, and a king-size bed. We got a discounted rate, but even without that, it's well worth the full price to get the suite if you can do it. Here are some pictures: 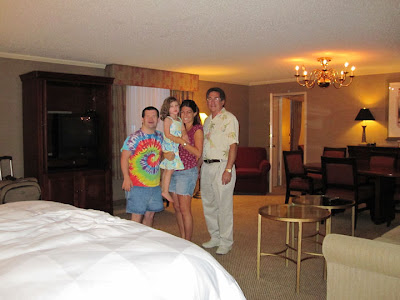 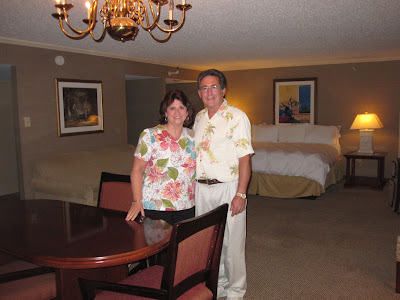 I'd guess that about half the people staying there were Sesame Place people. There were lots of families roaming the hotel with little kids clutching Elmo dolls, wearing Cookie Monster t-shirts, and waving Abby Cadabby wands. We met up with a couple of these families in the hotel's restaurant (good food), and they looked like they'd just seen a war.

"I have never seen anything that crowded in my entire life, and I never want to again," said one dad.

My heart sank. It was a Thursday, for crying out loud. It was that crowded on a Thursday? That didn't bode well for us, who were going on Friday at the end of the summer. I figured Friday had to be an even busier day.

"There weren't many people with the line passes," the mom told us. "If we had it to do over, I'd get those."

She was talking about the "Abby's Unlimited Magic Queue" bracelets you can buy for an extra $30 per person. Not a cheap add-on, but it means you get to cut the line at most of the attractions and even at some of the shows. We took her advice and got passes for four out of six of us, figuring not all of us needed to accompany Sarina on every ride, so we didn't all need passes.

We had been warned to get there very early, because it gets more crowded as the day goes on, but all the worry was for naught-- it was crowded, but "normal" crowded, not crazy-crowded. The line passes were nice, but on the day we went, not a necessity. The waits for the rides were not exhorbitant. On reflection, I think it had been so busy that Thursday because the few days before it had been rainy-- probably all the people who had planned to go on Monday through Wednesday had all piled up on Thursday. 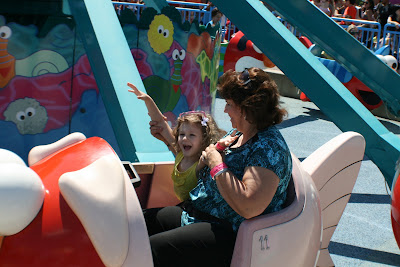 About half the attractions are water-based rides-- such as a wave pool, a family tube ride, and a water slide-- and the other half are dry rides such as a carousel, flying Elmos, and a "mountain" to climb. In our one full day at Sesame Place, we didn't get to all the rides, but I'd guess we went on more than half of them. It was plenty. There are rides appropriate for the littlest ones all the way through adults (I screamed like Drew Barrymore in E.T. all the way down the family tube ride... which led to a wise-ass attendant kicking water at me every time our tube slowed down, and at least two hours of ribbing from my sister, who noted that my 3-year-old daughter was laughing while I was screaming).

But the big event of the day was our character lunch. That's the thing I'd suggest you really don't miss.

Seeing characters at the park throughout the day is very hit-and-miss, and when you do spot them, there's usually a long line to meet them (except Elmo, who has his own picture-taking spot that you can visit). We spotted The Count, Telly, and Abby roaming the park, but didn't stop to talk to them. If you're looking for a little one-on-one hugging time, you have to do a meal with the characters. Totally worth it. 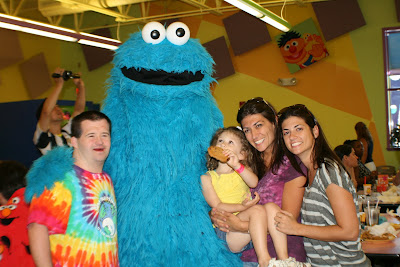 Whoever plays these characters, they're great people. They really take their time at each table and do little things to make the kids feel special. Bert came over to us twice and just sat with us and invited Sarina to sit on his lap (not even complaining when I told him she was wet from the wave pool). Ernie signed "I love you" to my brother. Cookie Monster pretended to eat the cookies we offered him. They make sure that each "roaming" character makes it over to every table, in addition to doing a little dance in the middle of the cafeteria. Big Bird doesn't come around, but he sits in one spot and the kids can line up to visit with him. Elmo also stays in one spot, and a professional photographer snaps pictures with him that you can buy for a few extra bucks if you want to.

The food is passable. Nothing great, but of course, that's not the point. I was too excited to eat much, anyway. I was busy with pictures and video the whole time. 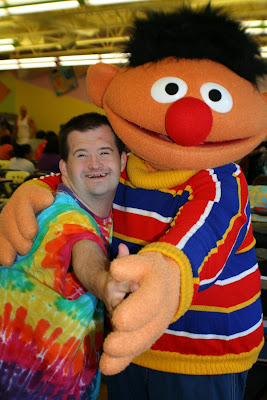 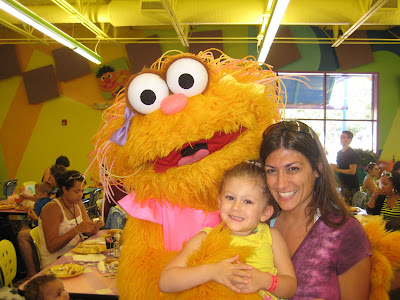 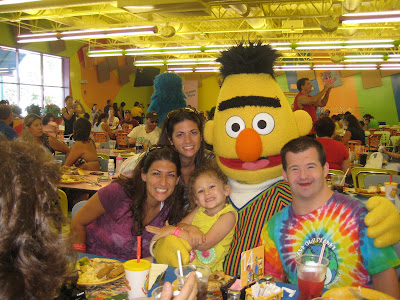 We also went to see a showing of Elmo's World Live, where somehow, Sarina managed to get into the show despite that no one had actually called her to the stage. (The two people in charge of picking volunteers looked at each other and signaled what appeared to me to be something like, "Did you call her up here?" "No. Did you?" "No." "Oh, well. She doesn't look like too much trouble. Give her a costume.") It was a fun little show where about 8 kid volunteers pretended to be fish at various parts. If you like Elmo's World on TV, this will feel a bit surreal, like you've just walked into your television set.

I had just one bad experience at Sesame Place, and it had to do with the attendants not enforcing the rules. At the pool, there's a sign that specifies that no regular diapers are allowed-- kids who wear diapers must be in swim diapers. But there was a boy, maybe 18 months old, wandering around in the pool in a saggy regular diaper. I couldn't figure out who his parents were-- he was totally unsupervised in the water-- so I went and told one of the attendants. He looked appropriately concerned, walked as if he were about to go over to the little boy, then changed his mind and went to talk to the other attendant. Together, they did... nothing.

A few minutes later, the little boy went out of the pool, then right back into it. As we walked along the edge, we spotted the probable reason: a poop, sitting right out at the edge of the pool. This time, I went to the other attendant and told him that there was a giant pile of poop right at the edge of the pool and a little boy in a regular diaper still in the pool. As I walked away, the attendant called to the baby. "Hey, buddy," he said.

Uh, yeah, right. Hey, buddy? An 18-month old is going to understand that and come right over? Of course, he didn't. I watched from he side for another couple of minutes and saw that once again, the attendant did nothing, and Diaper Boy kept frolicking freely. But at least someone came over with a broom and swept the poop away.

I was sufficiently grossed out and we left the pool, but what bugged me more was that that same water is recirculated throughout the park. There are always health dangers that come along with water rides, but this was too much. Those two young attendants should have had the power and inclination to enforce the rules.

After that... interesting... experience, we went to the parade. Get there early and put down a towel if you want to stake out a good spot. We had a good view and the crowd was very nice-- parents and kids weren't jockeying for position and pushing each other out of the way like I expected. It's a good show, with floats and music and dancing, and characters giving out high-fives and handshakes along the way. The parade runs twice a day. 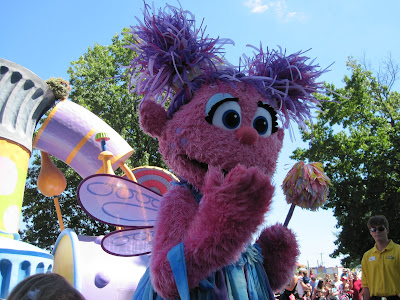 No matter what your kids are into-- bouncing, climbing, watching shows, spinning, or tubing, you'll find plenty of fun here. We're already looking forward to going back next year.