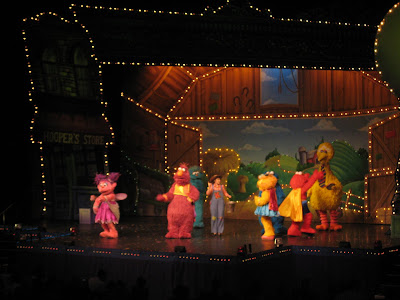 The nice people at Sesame Street Live gave me tickets to see Elmo's Healthy Heroes with 3-year-old Sarina... ironically, I got sick just before the show. Sarina-- the little person who got me sick, mind you-- was feeling better, though, so my parents took her to see it at Nassau Coliseum in Uniondale, NY.

Nassau Coliseum is always a great place to see a show. There is so much elevation between rows that you never have to worry about seeing over people's heads-- there's always a good view. And in the case of the children's shows here, they don't take up the whole Coliseum. Maybe a third of the place. The only complaint I heard about the venue is that it was absolutely freezing.

Anyway, I sniffled and stuffled at home while those three were off having the times of their lives, apparently, because as my dear daughter came home bearing a giant Elmo balloon and two light-up whozamajigs that spin, she was bursting with energy and excitement about the show. And my parents were pretty darn jazzed about it, too.

As the show opens, Super Grover comes crashing down out of the sky (he's okay) and can't seem to fly again. The show then becomes about how Super Grover has lost his superness, and the other characters have to figure out how to get him to be super again. They figure out that Grover hasn't been eating right, sleeping right, taking care of his hygiene, or exercising, so they teach him how to turn his health around.

The show is high-energy and full of music-- including some well-known Sesame Street classics like "Somebody Come and Play" and "Doin' the Pigeon," and clever new lyrics set to familiar songs, like James Brown's "I Got You (I Feel Good)" and "I Hope I Get It" from A Chorus Line.

My daughter couldn't wait to show me the "Fabulous Five Cheer" that she learned-- and practiced numerous times in front of the mirror. And the next morning, she told me that she was hungry and ready for breakfast... and that she had to "eat her colors," as she learned from Elmo.

So it worked on all levels, educational and entertainment. All of your favorite characters are in this show (Big Bird, Grover, Elmo, Abby, Cookie Monster, Oscar, Telly, Zoe, Bert and Ernie, Rosita, Prairie Dawn, Grundgetta, Honker, and The Count), and they make a big entrance and interact with the audience. The sound quality was very good, and the costumes, sets, and special effects were lots of fun.

The show runs 90 minutes with an intermission. Even though I didn't get to see it personally, I will trust the delight of my family and tell you that this one's a hit. Check to see if it's coming to a venue near you at http://sesamestreetlive.com/.